Keep Up with CareOne 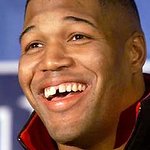 Michael Strahan, defensive end for the 2007 Super Bowl Champion New York Giants, and co-host of Live! With Kelly and Michael and Natasha Bedingfield, the British-born singer/song writer will help kick-off a $1 million fundraising campaign designed to assist CareOne/HealthBridge employees and their families, as well as researchers, in the fight against cancer.
Strahan, the newest member of the Good Morning America team and co-host of Fox NFL Sunday, and Bedingfield, the award-winning performer, will join top R&B artist Ne-Yo at the July 27th event at Fenway Park for which Strahan will serve as master of ceremonies. Launched by Daniel E. Straus, Founder, Chairman and CEO of CareOne Management, the campaign and fund were developed in support of HealthBridge executive Dan Grimes, 42, of Carver, Massachusetts, who has been diagnosed with Stage IV lung cancer.
Widely recognized for his commitment to a “hands-on” approach to philanthropy, Strahan contributes his time and talents to diverse organizations, working with children, members of the armed services and veterans.
“I am inspired by CareOne’s efforts to support one of its own. On Sunday, the company will be raising more than funds at Fenway, they will be raising hope. It is an honor to take part in this event and I look forward to my time in Boston,” said Strahan.
An activist whose charitable work takes her around the globe, Bedingfield, the recipient of numerous industry honors and accolades for a string of hits including “Unwritten” and “Pocketful of Sunshine,” was eager to join forces with CareOne.
“Everyone knows someone who has been affected by cancer,” said Bedingfield. “And I welcome the chance to contribute to this amazing event through my music. The dollars raised will make a difference in the lives of cancer patients and their families that is real and measurable. I am so proud to be part of this caring community.”
As the Southeastern Massachusetts regional manager for HealthBridge, which has 15 healthcare facilities in the Commonwealth, Dan Grimes has spent his professional career caring for others. A dedicated husband and father of four children under the age of 12, his life took an unexpected turn when he was diagnosed with Stage IV lung cancer, despite having never smoked.
When word of Dan’s illness reached senior management, Straus announced that CareOne and HealthBridge would launch a fundraising campaign to help employees like Dan meet the unexpected expenses that often arise when family members are coping with a challenging diagnosis. Grants from The CareOne Cancer Fund in Honor of Dan Grimes, will allow employees and their families to focus on their recovery and support essential research.
CareOne has successfully waged other campaigns, raising more than $1 million to help those impacted by Hurricane Sandy, donating $250,000 to the One Fund for victims of the Boston Marathon bombing, and generating more than $1 million for The Valerie Fund, an organization providing programs and services for children living with cancer and blood disorders.
“Dan’s story is our story,” said Straus. “Like all of our employees, he has dedicated his career to helping our skilled nursing care residents and their families. While those in our profession are committed to caring for others, we also need to take care of our own. At CareOne and HealthBridge, we don’t just work in the communities where our residences are located; we also live in these vibrant communities. And when something happens, whether it is one man’s battle with cancer or the ravages of a hurricane, it happens to all of us and we need to stand up as a community.”
The Fenway Park fundraiser is expected to attract more than 1,000 participants, including many of Dan Grimes’ co-workers and friends, who have already launched smaller fundraising events in the Massachusetts communities where HealthBridge operates skilled healthcare facilities, as well as in New Jersey where CareOne operates 29 facilities.
“This is the toughest battle I’ve ever had to fight. But thanks to my colleagues and CareOne, I know I’m not fighting alone,” said Grimes.
In addition to performances by Bedingfield and Ne-Yo, Sunday’s event, which runs from 4:00 to 8:00 p.m., will feature a special appearance by Jack Edwards, play-by-play announcer and the television voice of the Boston Bruins and a longtime advocate for cancer-related causes. Tours of the historic ballpark, food, raffles and other family-friendly activities will round out the program.
Tickets are $100 for adults and $20 for children under 12 and can be purchased online here. For more information about the event, please visit www.care-one.com.

Sign up for the latest news and events from CareOne.